Biggest Caves in the World: An Underground World of Adventure

Do you love exploring caves? If so, you’ll be excited to learn about the biggest caves in the world. These huge underground spaces are perfect for spelunking and offer some of the most amazing natural beauty imaginable. Whether you’re looking to explore a new cave or just learn more about these spectacular formations, read on for more information about the biggest caves in the world.

From intricate passageways to vast underground chambers, these caves offer explorers plenty of stunning sightseeing opportunities. With everything that is going on around you, it will almost feel like you are on another planet, but don’t worry; that is all part of the fun and unique experience.

Many of these caves are so large that only a small portion has been discovered, and some even have rivers and waterfalls. They are also home to different forms of life like fish, salamanders, and even new species that haven’t yet been identified. All of this adds up to an adventure of a lifetime and makes these caves a must-visit if you are ever able to go.

When planning your trip to one of these awe-inspiring caves, make sure to visit our lists of the best travel sites, best travel accessories, and best travel blogs. These lists will ensure that you have everything you need for your trip.

Top 15 Biggest Caves in the World:

Highlights: It has an intricate structure, many underground passageways, and is one of the most popular tourist destinations on Earth.

About Cave: Wind Cave is one of the world’s largest and most fascinating caves in the world. With its intricate structure and many underground passages, it’s a maze-like marvel that will astound visitors. This massive cave system is riddled with intricate passageways and boasts awe-inspiring visuals – making it one of the most popular underground tourist destinations on Earth. 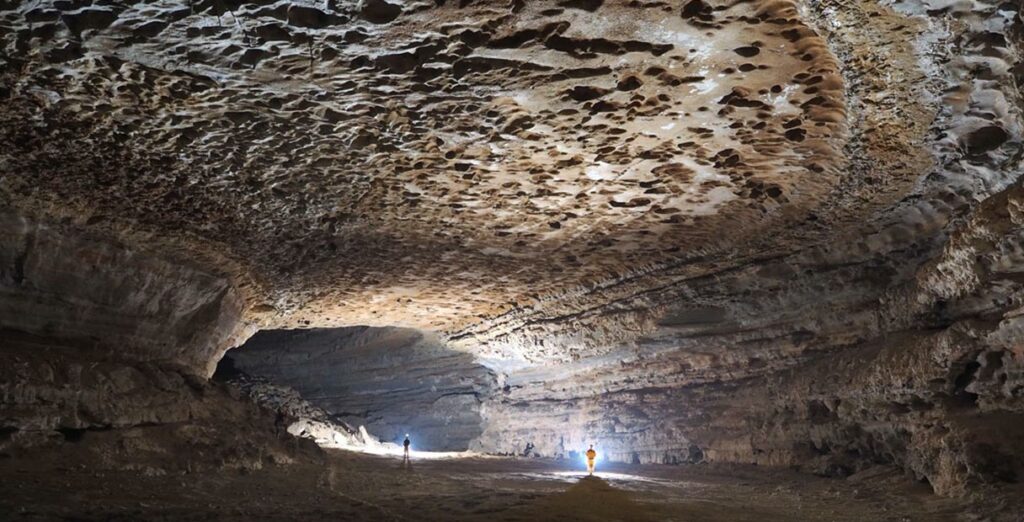 Highlights: Longest cave in China, has at least three rivers, a number of waterfalls, and is home to creatures including fish and salamanders.

About Cave: The Shuanghedong Cave Network is the longest cave in China and a fine example of an underground ecosystem. With at least three rivers and several waterfalls, the cave is home to fish and salamanders, among other creatures.

Various expeditions have been carried out in an attempt to map the passages and discover the cave’s secrets, and there is still more to explore. So if you’re looking for adventure and intrigue, this is the cave for you.

Highlights: Impressive cave formations, thousands of bats live within the caves, and it is home to the Sarawak and Deer Chambers.

About Cave: The Mulu Caves, located in Gunung Mulu National Park on the island of Borneo, are home to some of the world’s most impressive cave formations.

The Sarawak Chamber, which measures 1.66 million square feet, is the world’s largest cave by surface area, and the Deer Chamber is one of the largest cave passages on Earth. Thousands of bats live within the caves, and visitors can explore their labyrinthine passageways on guided tours.

Highlights: A length of over 5.5 miles, caverns large enough to hold a 40-story building, and described as a ‘natural wonder’ by explorers.

About Cave: Son Doong Cave, located in Vietnam, is one of the largest caves in the world. With a length of over 5.5 miles, and caverns large enough to hold a 40-story building, Son Doong is an awe-inspiring sight to see.

Explorers who have ventured into the cave have described it as a “natural wonder.” So if you’re looking for an incredible adventure travel destination, add Son Doong Cave to your list. 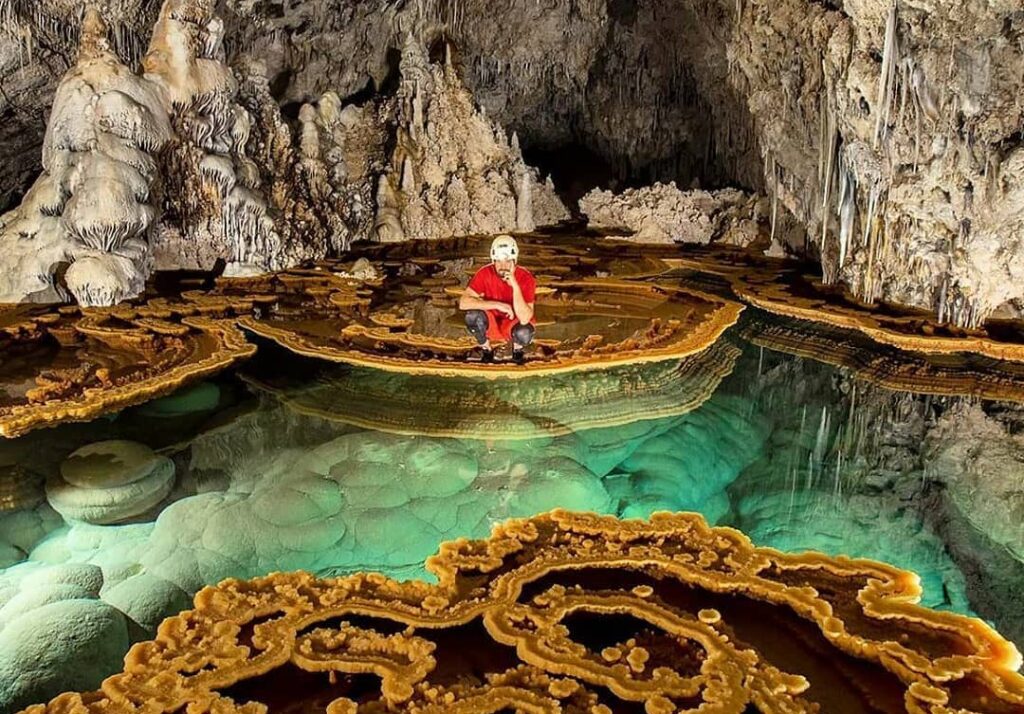 Highlights: Thought to be the deepest cave in the US, home to amazing mineral formations, and has been studied by explorers since the 1980s.

About Cave: Lechuguilla Cave is one of the most interesting and beautiful caves in the world. It is considered the deepest cave in the United States, and its mineral formations are sure to amaze visitors. Explorers have been investigating Lechuguilla Cave since the 1980s, and it’s a must-see for anyone visiting New Mexico.

Highlights: Formed thousands of years ago, has a freshwater source, and has 167 miles of caves to explore.

About Cave: Mexico’s Sistema Ox Bel Ha is one of the largest cave systems in the world and offers visitors a unique look into the country’s underground history. Formed thousands of years ago, today, the system is valued as one of the region’s prominent sources of fresh water. With 167 miles of caves to explore, visitors can expect an adventure like no other (don’t worry, though. You can explore as little or as much as you want).

About Cave: If you’re looking for an adventure that offers both natural beauty and stunning geology, Jewel Cave is the perfect destination. This cave system in the Black Hills National Forest of South Dakota is home to some of the world’s biggest caves, as well as gorgeous crystal formations.

With a variety of tours available, you can choose how much underground exploration you want to do (or if you even want to go underground at all). No matter which tour you choose, though, be prepared for some awe-inspiring views.

Highlights: Home to an underground river, has unique rock formations, and is a UNESCO World Heritage Site.

About Cave: If you’re looking for one of the world’s biggest caves, look no further than the Clearwater Cave System in Miri, Sarawak, Malaysia. This interconnected series of caves is home to an underground river and some of the most unique rock formations you’ll ever see.

And if that’s not enough for you, the park where the cave system is located is a UNESCO World Heritage Site. So come explore one of the most amazing natural wonders on Earth.

Highlights: It offers 365 miles of recorded caves, is the biggest cave system in the world, and is a National Park.

About Cave: Mammoth Cave is a must-see attraction for any adventure traveler. With its 365 miles of recorded caves, it’s no wonder this site is the biggest cave system in the world. Tourists have been exploring these caves for years, and there’s still more to be found. With its stunning stalactite formations, Mammoth Cave is a natural wonder not to be missed.

About Cave: If you’re looking for an awe-inspiring underground adventure, look no further than the New Athos Cave in Georgia. This massive cave is home to some of the world’s largest chambers and formations and offers visitors a unique look at planet Earth’s subterranean landscape. Whether you’re a geology buff or just looking for a new thrill, the New Athos Cave is sure to impress. Highlights: A volume measurement of 10.78 million cubic meters, only accessible along its underground stream, and has been laser-mapped by National Geographic.

About Cave: The Miao Room is easily one of the biggest caves in the world. With a volume measurement of 10.78 million cubic meters, this chamber is only accessible along its underground stream. The National Geographic Society funded a laser-mapping expedition to find these measurements and present them at the United Kingdom’s national caving conference.

Highlights: Measures 1,050 feet across, 400 feet deep, and is a part of a UNESCO World Heritage Site.

About Cave: The Great Blue Hole is not only one of the biggest caves in the world, but it is also one of the best diving sites on the planet. Jacques Cousteau explored its depths back in 1971, calling it one of the most incredible diving spots he’d ever seen.

The giant underwater hole measures 1,050 feet across and 400 feet deep, making it a must-see for any divers out there. It’s also part of the UNESCO World Heritage Site Belize Barrier Reef System.

Highlights: Longest gypsum cave in the world, features ten different areas, and has over 161 miles of tunnels to explore.

About Cave: If you’re looking for an adventure, look no further than Optymistychna Cave. This is the longest gypsum cave in the world and features ten different areas based on the various passage structures and gypsum varieties found within.

With over 161 miles of tunnels to explore, this is a must-see attraction for any adventurer. So get your boots ready and prepare to be amazed by one of the world’s most incredible caves.

About Cave: Step into one of the world’s largest caves – the Hölloch. This vast, subterranean wonder is 200.4 kilometers long and boasts an impressive depth of 938.6 meters. With its dramatic limestone formations and underground rivers, the Hölloch is a natural wonder not to be missed. Highlights: Underwater cave system, is the largest cave system in Mexico, and more of the cave continues to be discovered and explored.

About Cave: This underwater cave system stretches over 345 kilometers (currently, as more cave is discovered) and is one of the largest caves in the world. With all the beauty and awesomeness that a cave of this size entails, Sac Actun will not disappoint explorers.

Biggest Caves in the World Conclusion

The biggest caves in the world offer an incredible underground world of adventure for explorers to enjoy. With intricate passageways and vast chambers, these caves are truly amazing natural wonders. And while you may not be able to visit all of these caves, you should be able to start planning a trip or two.

But even if you can’t visit any of them in person, they are still fun and interesting to learn and read about. Plus, some of the pictures and videos are pretty awesome. Just be warned, though; the more you learn about these awesome caves, the more you will want to go and explore them!

If you are planning a trip, visit our list of the best outdoor clothing brands. This list will ensure that you are dressed and ready for anything these caves throw at you.

Is there a cave that you think should’ve made this list but didn’t? Please feel free to share your recommendations below.